“Light, refined, learned and noble, harmonious and orderly, clear and logical, the cooking of France is, in some strange manner, intimately linked to the genius of her greatest men. “

Describe French cuisine in two words and ‘elegant‘ and ‘refined‘ stand out. The people of France possess tremendous passion for food. Simplicity in the amount of ingredients used and yet a complexity in flavors, textures and techniques is what has made French cuisine to be considered one of the best in the world!

The measurements, seasonings, ingredients are often precise and do not welcome much deviations. The same characteristic of preciseness is seen in execution in other areas as well. The people of France share the same appreciation, respect they have for food with art, literature, architecture and theatre.

And it was indeed a pleasure to having got a chance to learn a French dish taught by a Frenchman! The dish was Ratatouille Nicoise – cooked in South of France style. The main ingredient here is the aubergines or the eggplant that are diced and sauteed and then simmered with onions, bell peppers, zucchini and loads of tomatoes! 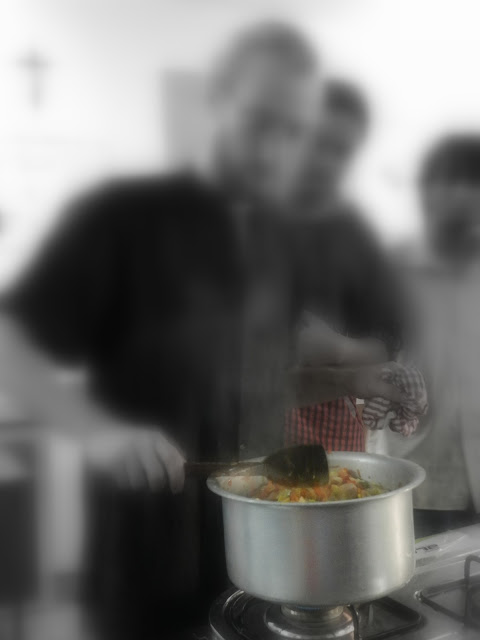 What is a Ratatouille Nicoise?

Ratatouille Nicoise is a French Provencal stewed vegetables originating from Nice. It is usually served as a side dish but can make a meal of its own along with rice or pasta.

All the ingredients are simmered together for nearly an hour to let all the vegetables soften and be cooked in the tomato juice. The dish is seasoned with salt and pepper and a sprinkling of herbs and then finished off with black olives.

Some recipes call for vegetables to be simply sauteed rather than simmered together. There is then the layering method were the onions, tomatoes and garlic are made into a sauce. The sauteed vegetables are layered along with the sauce and baked.

Herbs that can flavor a Ratatouille are thyme, marjoram, bay leaf, basil. 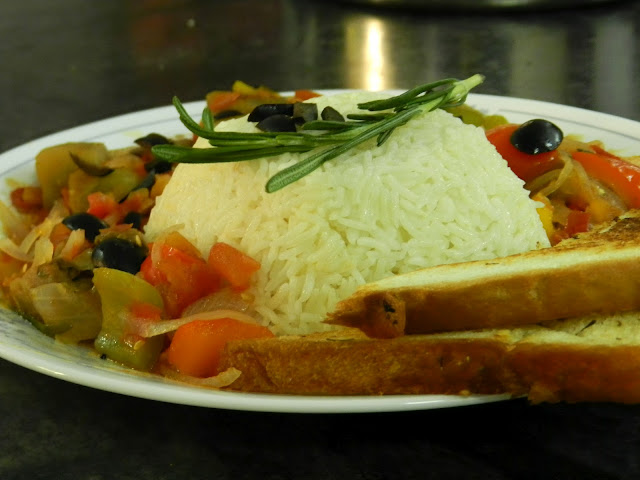 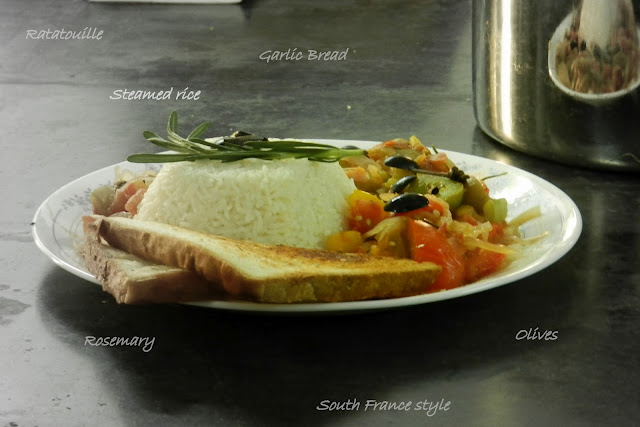 The chef-of-the-day with his cheerful attitude and passion for cuisine of his country taught the enthusiastic learners how to make this simple dish in a way that best brings out the different flavors of vegetables used.

For this French cooking class, some of us learners were handed over cutting boards, knives and peelers and the vegetables, garlic and were  instructed how the vegetables needed to be chopped. Each of the diced and sliced fresh veggies were first lightly seasoned and sauteed separately till partially cooked. This will enhance and bring out the individual flavors of the veggies. Then the  sauteed veggies and rosemary were simmered together covered for almost an hour to let them soften well and cook in their own juices. The tomatoes let out their juice giving the dish a light gravy.

Our queries of the recipe, variations were duly answered by him. And having lived in this town, he was aware of the ingredients that are or not available here and so we were also told of substitutes that would work best while giving the dish the same authentic taste.

This stew is mildly flavored with the main aroma given by the rosemary. Each of us were handed over take aways of the ratatouille along with the rice! But of course the entire batch of garlic bread which was nearby and unguarded was relished by all who attended the class as soon as it was out the pan! 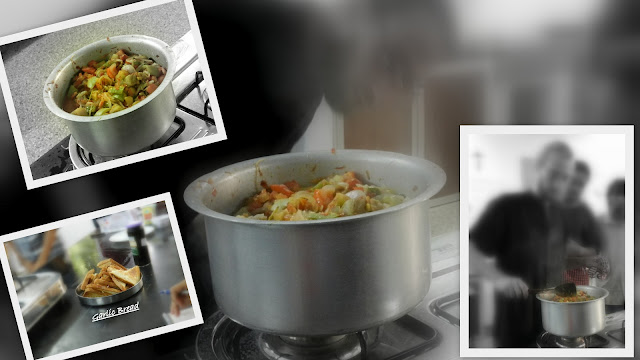 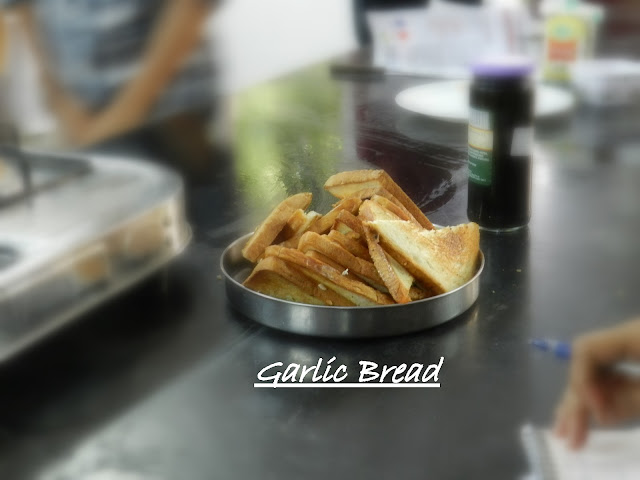 In the end, it was an immensely wonderful experience and we got some really good insights into this refined cuisine. After having listened to chef Lucas, I was all the more interested to research more on French cuisine and so here is some more info!

About this elegant and sophisticated cuisine!

This is a cuisine that has evolved over time from the middles ages. The cuisine is considered to be impacted by 3 aspects :

–  the marauding Moors – who brought goats into France and influenced the ingredients used and the   cooking techniques.

There are four approaches to French cuisine :

1. Classical French cuisine – This approach is the rich and filling food. The dishes are cream-based.

2. Haute cuisine – Meaning ‘high cuisine’, this is classical French cuisine taken to a sophisticated level.   This approach has its foundations during the 17th century. Only the finest ingredients were used with strong emphasis on the presentation of the dish. Many refinements were seen in ingredients being used, cooking methods and the way in which dish was plated up. ‘Ragout’ – the popular French stew first made its appearance in this stage.

3. Nouvelle cuisine – Developed in the early 1970`s, the dishes here are simple and light and smaller in portions. Portuguese immigrants into the country also influenced Nouvelle cuisine. This approach is more of working towards ‘rebelling’ some of the ‘orthodoxy’ in the cuisine. Cooking processes are shortened to retain the natural flavors of the ingredients. The dishes can be made quicker and thereby foregoing some of the more complicated techniques. The emphasis is on seasonal ingredients. Fresh herbs, butter, lemon replaced the heavy cream based sauces.

4. Cuisine du terroir – The focus here is on local produce and regional specialties. ‘Rustic’ may be the term that can describe the characteristic of this approach.

Being passionate about food, meal times are given great importance by the Frenchmen. Food to them is to be enjoyed and savored at leisure. And it is for this reason lunch time in France is usually two hours long!

At present times, French cuisine is characterized by different regions that have their own distinctive styles and variations in food and food culture.

In Paris, that are Central regions of France, have food cultures from the very many other regional cuisines. Popular ingredients used are red wine and garlic.

From Lorraine comes fine fruit preserves as well as the popular ‘quiche lorraine’. Quiche is a open savory pastry (pie)  filled with vegetables or other fillings, savory custard and cheese. The cheese actually was a later addition.

In Normandy apple trees are found in abundance which find their way in very many recipes. Normandy also grows ample amounts of wheat, chicory.

Just as French cuisine is influenced by different regions, it varies with the season too. Salads and fruit based dishes provide refreshing alternatives for the summer.  The end of summer sees an abundance of mushrooms. Hunting season commence in September and runs through till February.

French meals are structured as –

– Le dÃ®ner or dinner – consisting of hors d’Å“uvre or entrÃ©e (appetizers or soups), plat principal ( main course) followed by a cheese course or yogurt or dessert. Dessert may be as simple as freshly cut, juicy fruits. Main/ vegetable dishes are accompanied by rice, bread, pasta for the main course.